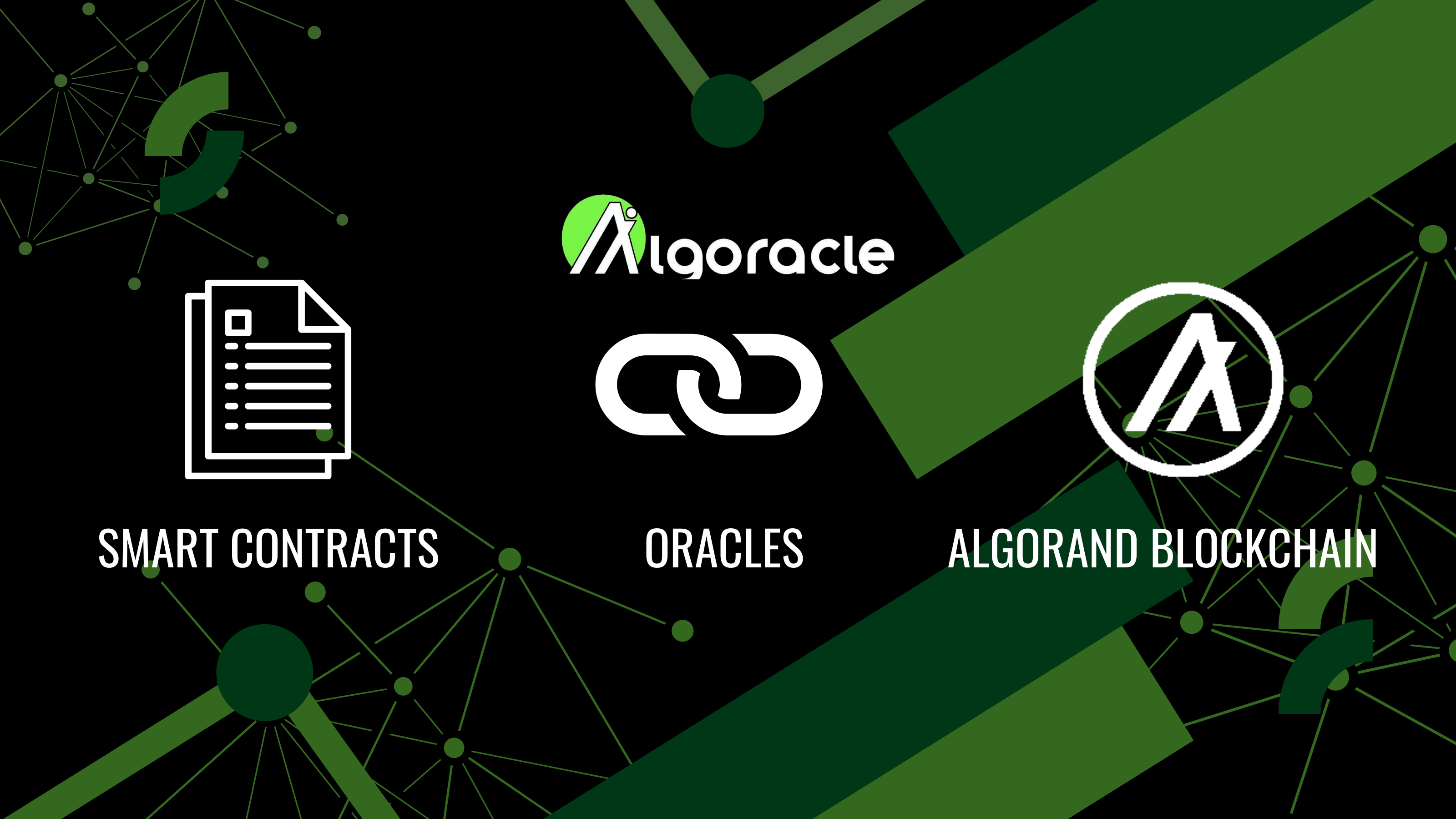 A deep dive into Smart Contracts, Oracles, and the Blockchain of data.

Before we go further, we need a rudimentary understanding of Smart Contracts.

DeFi 101: What are Smart Contracts?

Smart contracts eliminate the need for a third party to mediate the terms of a contract between two parties. Using blockchain technology, the contracts automate and secure transactions. As a result, increased efficiency and lower costs can be achieved because transactions can occur directly between the buyer and seller.

A smart contract's security comes from its ability to be inspected by all parties, allowing them to understand what the code does when they interact with it. It is impossible to change a transaction once it has taken place, but you can always go back and check what you did.

Smart contracts are more efficient because they don't require a third-party intermediary. When the conditions are met, the transaction occurs immediately, without waiting for regular business hours.

How Do Smart Contracts Work?

For a smart contract to work, certain conditions must be met before a piece of code can be executed. They use if-then-else logic in the majority of cases. If X happens, Y will happen due to the Smart Contract in play.

To make a smart contract program irrevocable, developers upload it to the blockchain. Anyone can see the code, clarifying what will happen if the smart contract is manipulated.

The program is executed on a blockchain and permanently records the transaction as soon as the smart contract's conditions are met.

The fundamental limitation of smart contracts is that they cannot interact with data or systems that exist outside of their native blockchain environment. External resources are referred to as "off-chain," whereas data already stored on the blockchain is referred to as "on-chain."

Blockchains obtain their most valuable properties by being purposefully isolated from external systems, such as strong consensus on the validity of user transactions, prevention of double-spending attacks, and mitigation of network downtime. Interacting securely with off-chain systems from a blockchain necessitates using an additional piece of infrastructure known as an "oracle" to bridge the two environments.

Oracles establish a two-way communication channel with blockchains, allowing data to be sent in and transferred out. While outbound oracles can transport blockchain data to the outside world, inbound oracles are more commonly used to transport off-chain — or real-world — data to the blockchain. The imported data can represent almost anything, including asset price fluctuations, weather conditions, and proof of successful payments.

A typical programmable scenario for inbound Oracles. "Place a buy order if an asset reaches a certain price." As another example, suppose A bets B that it will rain the following week. A smart contract would be used to secure the bet amounts. An oracle would provide weather data that is both accurate and immutable. Depending on whether the data showed that it had rained for one week straight, the funds would be delivered to person A or person B.

On the other hand, outbound oracles notify the outside world of an event on-chain. A smart contract, for example, could be programmed to unlock an internet-enabled smart lock on a real-world rental unit if a cryptocurrency payment is received at a specific crypto wallet address.

In smart contracts, oracles controlled by a single entity serve as the sole data source. They demand that contract participants place a significant amount of faith in a single party. In addition, they represent a single point of failure, which could compromise the security of a smart contract. A smart contract's integrity is jeopardized if an oracle is compromised. Because smart contracts are highly dependent on the quality of the data they receive, oracles wield considerable influence over them.

Smart contracts were created to avoid counterparty risk and over-reliance on third parties. However, it is possible for an oracle to become the middleman it was designed to replace, especially if it becomes overly centralized. Protecting privacy, security, and equity while avoiding over-centralization, which could harm the relationship between smart contracts and blockchains, is what is known as the oracle problem. Oracles face this challenge head-on because of the risks associated with centralization.

A decentralized oracle aims to eliminate trust and produce deterministic outcomes by relying on cause-and-effect relationships rather than personal connections. Their goal is to distribute trust among many network participants, much like the blockchain network, to achieve these outcomes. Decentralized oracle networks can increase the security and fairness of smart contracts by utilizing many different data sources and implementing an oracle system that is not controlled by a single entity.

Oracles can be as vulnerable to manipulation as any other third party. However, Smart Contracts can be used in many different markets. The development of decentralized oracles to address this issue is an exciting one for the cryptocurrency and blockchain industries.

Why Build on the Algorand Blockchain?

At each block round, Algorand selects a block proposer and a voting committee to propose and validate a block, respectively. Those who hold Algos (tokens) are pooled into a pool, and the likelihood of being selected is proportional to the account's stake in the network (i.e., how many Algos it has relative to the whole). Verifiable random functions and "cryptographic sortition" are just two of the many cryptographic algorithms used to ensure that the vote is fair, no one can collide, and that the overall voting system is extremely secure.

Proof-of-stake and proof-of-work are the two most common types of blockchains today.

For the sake of simplicity, a proof-of-stake blockchain gives users who have more stake (and therefore own a larger portion of the system's underlying currency) more power to propose and validate new blocks.

Good network behavior is incentivized by using a blockchain's native currency. In this case, Algo is the currency of Algorand Blockchain.

You can register to participate in consensus if you have Algos, which means that you can propose and vote on new blocks as part of the process.

The Algo is also a utility token, so it was created. If you want to store data on the blockchain, you'll need Algos to pay transaction fees and serve as minimum balance deposits. These fees and minimum balances are extremely inexpensive; they amount to pennies or less in most cases.

When network traffic is high and blocks are frequently overcrowded, fees are calculated based on the transaction's size, and a user can choose to augment a fee to help prioritize block acceptance. Fees for fuel are nonexistent on Algorand. A transaction costs a minimum of 1,000 microALGOs (.001 ALGOs).

The blockchain ledger is considered superior when comparing a distributed ledger to a traditional ledger owned by a single entity earlier. However, this would not be the best use of any blockchain due to the ease with which a small number of nodes could easily manipulate the chain's current state.

Algorand is a permissionless and open system. Therefore, consensus can be reached by anyone with Algos, anywhere in the world.

How can you be sure that what we're telling you is accurate? To see for yourself, you can do so. Almost all of the core protocol's code is available for download and use. So it's open for anyone to look over and make edits.

So that your app's users aren't discouraged by excessively long load times. There is a throughput of about 1,000 transactions per second on Algorand, where blocks are generated every 4.5 seconds and can contain up to 5,000 transactions (1000 TPS).

Until a certain amount of time has passed and the probability of the transaction being on an orphaned chain is practically zero, transactions in proof-of-work blockchains cannot be considered final. In other words, the actual throughput of this type of blockchain is hampered by a delay in the finality. Furthermore, if a transaction turns out to be invalid, the application's downstream processes must account for this.

Algoracle: The Future of Data and most dApps needs it

The future of data on the blockchain relies on security, privacy, scalability, and cost-effectiveness. Unfortunately, when compared with Algorand blockchain, the elephant in the room; Ethereum Blockchain, falls short.

While Algoracle is not a Blockchain in and of itself. It is a network of nodes and data providers distributed across the globe, offering true decentralization, numerous layers of security, complete public/private key encryption, fair pay-as-you-go pricing, and many new features. Algoracle: Frequently Asked Questions

Who is the team behind Algoracle?

Abdul Osman, the company's founder, has a track record of taking technological products from concept to delivery to scale. He leads a decentralized team of dedicated software developers, Blockchain developers, and mathematicians spread across a dozen time zones who have run extensive simulations of what a decentralized economy would look like. The team's diverse skills provide a unique perspective on assisting in the resolution of the 'Oracle Problem.'

Are ChainLink and Algoracle the same?
‍

While Algoracle and ChainLink share some similarities, their approach is quite different.

In simple terms, Algoracle is a decentralized oracle network based on the same proven technologies that have made Algorand the most efficient proof-of-stake (pOS) chain. Algoracle uses a variety of feed providers, including Sports, Stocks, Cryptocurrency, and Weather, to provide its clients with a wide range of information.

Unlike other open-source, decentralized systems, which make establishing a node operator extremely difficult, the APIs are forced to connect to external users, allowing those users to join the network.

More information and a copy of our white paper can be found by clicking on the link provided. 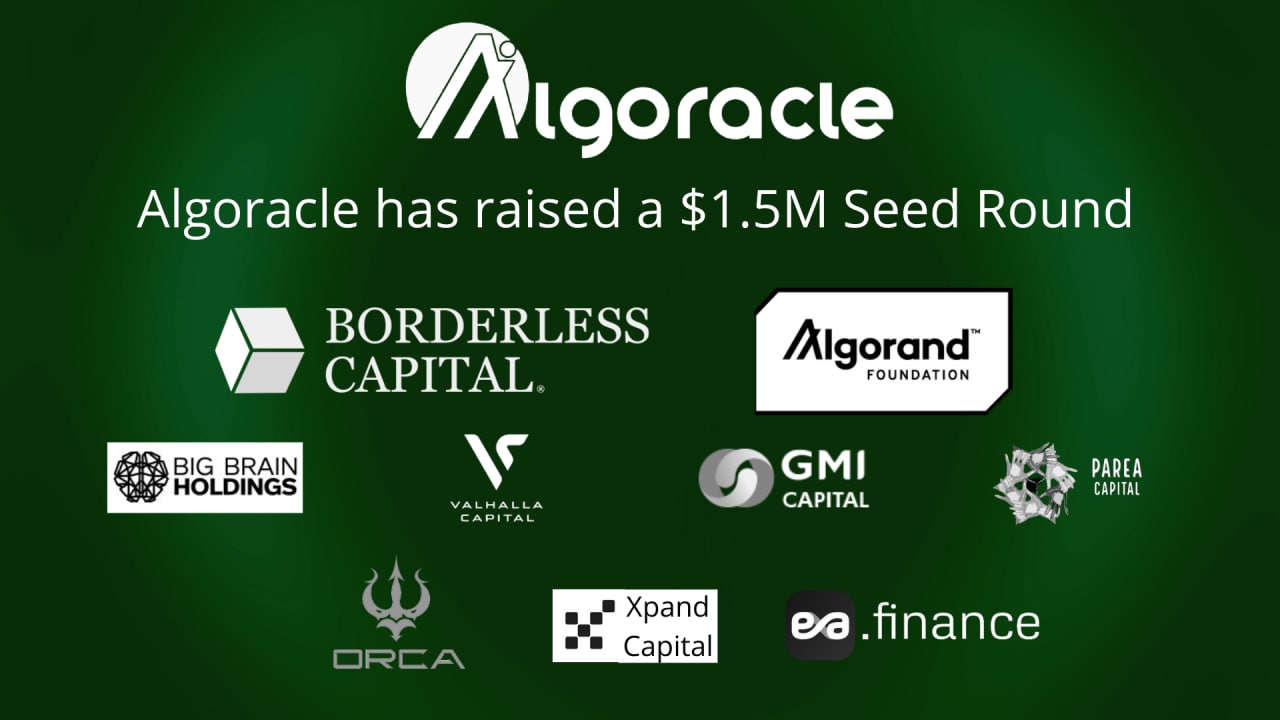 Algoracle has recently announced the close of its seed round for $1.5 million (USD) to help accelerate the development and launch of Algorand’s native decentralized oracle network. 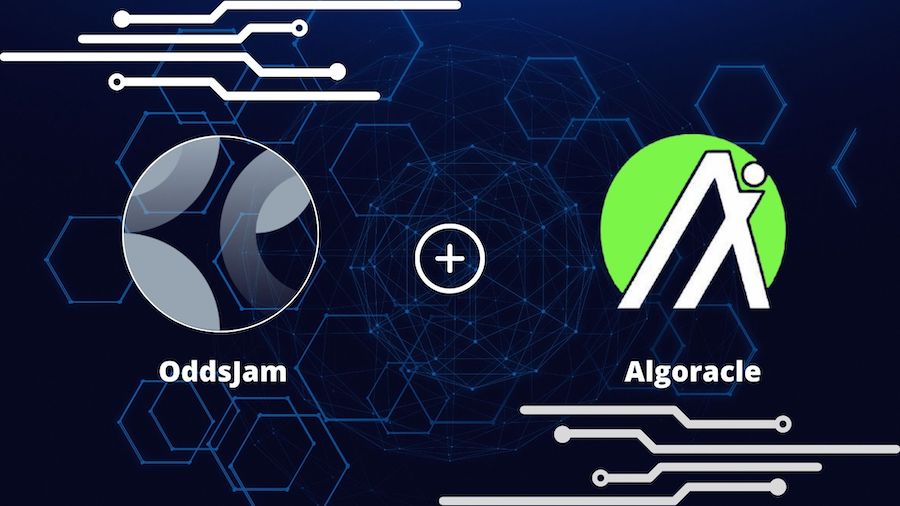 OddsJam will be the first decentralized sports betting API, to provide sports data to the Algorand ecosystem. Algoracle will aggregate that data and provide the data to the blockchain bringing real-time data to dApps without delayed data. 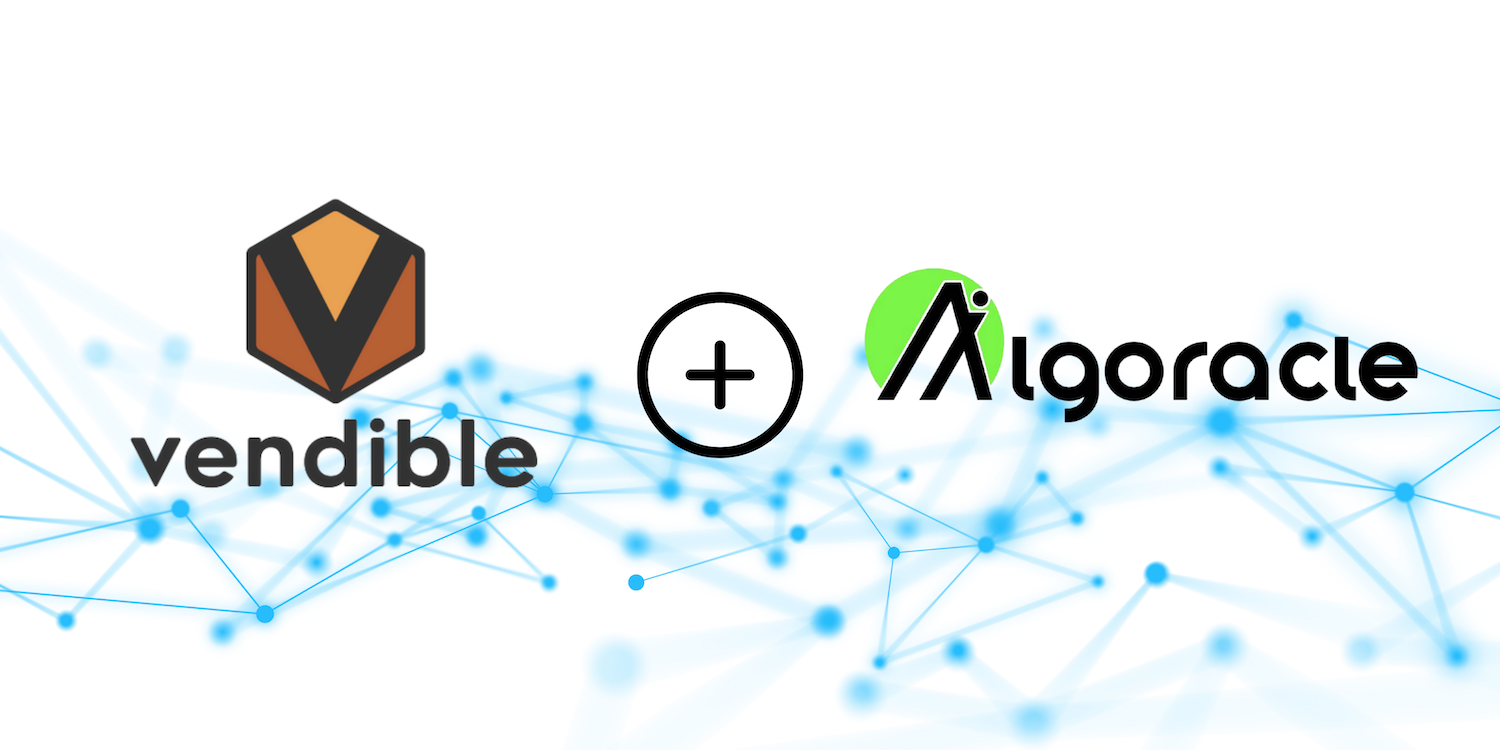 Vendible Partners with Algoracle on the Algorand Blockchain

Vendible, a provider of simple solutions making DeFi accessible for everyone and the first decentralized oracle network, Algoracle announce a partnership today. This announcement comes just two weeks after, Vendible announced the close of their Token Seed round at 1.78M USD with plans to allocate a portion of the funds to help accelerate new alliances and partnerships.